Objectives:
This study explored structure-function relationships during the early stages of MS and their role in cognitive performance.

Methods:
Patients were enrolled after their first neurological episode suggestive of MS and followed for 5 years. Healthy controls matched for age, sex and level of education were followed-up in parallel.
The evolution of structural and functional brain networks was investigated, and structural-functional coupling was assessed. Clinical and cognitive status was determined at each follow-up visit. The association between brain network parameters and cognitive performance was assessed using linear mixed-effects models.

Results:
The study included 32 patients (25 females) and 10 healthy controls. The mean (SD) age of the patients was 37.7 (10.4) years. Both structural and functional reorganisation was observed during the disease course. Structural clustering coefficient was significantly increased after 5 years whereas characteristic path length decreased, indicating strengthened short-distance connections and the loss of long-range connections. By contrast, functional connections and related path lengths were decreased after 5 years, suggesting stronger local short-distance connections. Structural-functional coupling had increased significantly after 5 years, indicating greater constraint of functional connectivity by direct anatomical connections. This structural-functional coupling was the only parameter associated with cognitive and clinical status, with stronger coupling associated with a decline in both domains.

Conclusions:
Our findings provide novel biological evidence that MS leads to less dynamic brain function in relation to the underlying anatomy of the brain. The collapse of this network leads to both cognitive impairment and clinical disability. 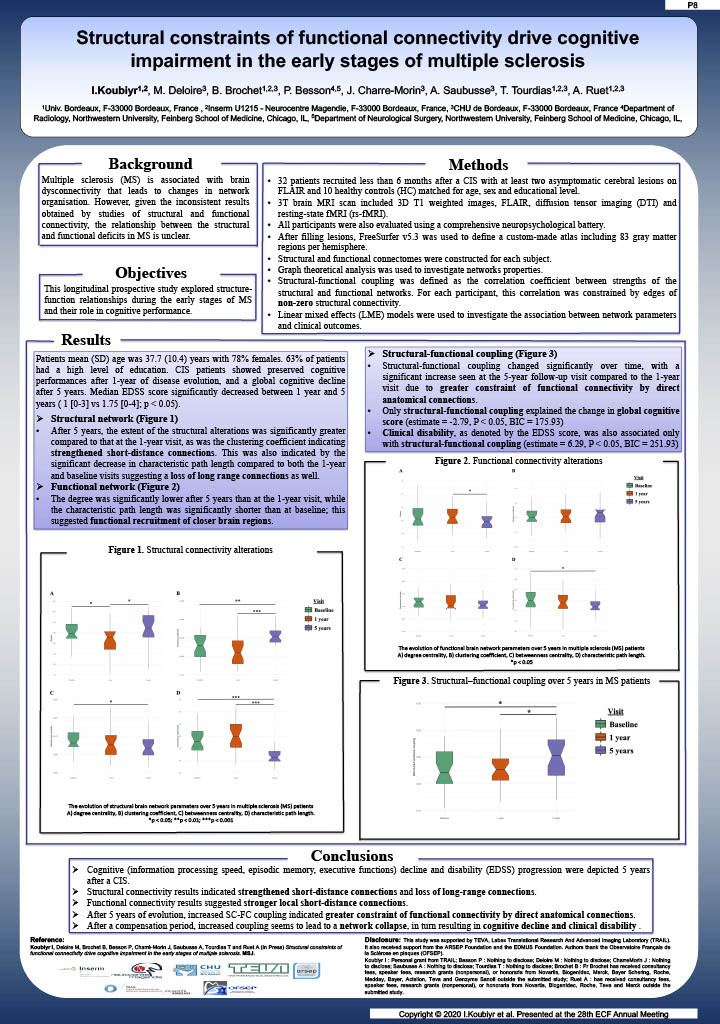